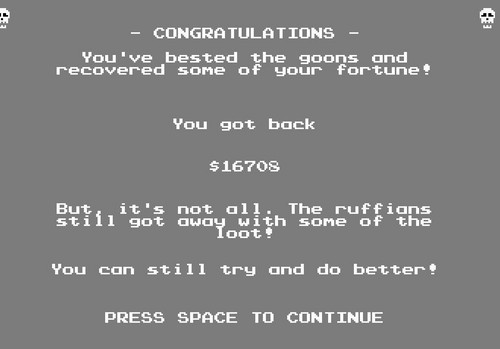 The results of the Highscore Contest are in! If you don't know what we're referring to, the original post is here: https://goldenbeard.itch.io/charles-mansion/devlog/105861/charles-mansion-highscore-contest-until-end-of-day-october-31

There were more submissions than expected, but in the end the top three contestants are:

These three can be immortalized as characters in the full update of Charles' Mansion (as an enemy or friendly/background character), and the first place gets to request specifics about the placement, behaviour and special traits their character should have. This could have a big impact on the direction part of the game will take based on what kind of character they want to be!

Thanks for submitting, and I hope everyone enjoyed playing the game!

Rise up to stop these mobsters from snatching your fortune! Beat them and collect as much of your money back as you can!